These Japanese servers, the so-called obscure 3, are so unknown outside of Japan that major news events like a Java EE 7 certification simply just does not make it out here.

Those servers are the following:

In this article we're going to take a quick look at the first one of this list: NEC WebOTX.

While NEC does have an international English page where a trial can be downloaded it only contains a very old version of WebOTX; 8.4, which implements Java EE 5. This file is called otx84_win32bitE.exe and is about 92MB in size.

As with pretty much all of the Asian application servers, the native language pages contain much more and much newer versions. In this case the Japanese page contains a recent version of WebOTX; 9.2, which implements Java EE 6. This file is called OTXEXP92.exe and is about 111MB in size. A bit of research revealed that a OTXEXP91.exe also once existed, but no other versions were found.

The file is a Windows installer, that presents several dialogs in Japanese. If you can't read Japanese it's a bit difficult to follow. Luckily, there are English instructions for the older WebOTX 8.4 available that still apply to the WebOTX 9.2 installer process as well. Installation takes a while and several scripts seem to start running, and it even wants to reboot the computer (a far cry from download & unzip, start server), but after a while WebOTX was installed in e:\webotx.

One of the first things I often do after installing a new server is browse a little through the folders of the installation. This gives me some general idea about how the server is structured, and quite often will reveal what implementation components a particular server is using.

Surprisingly, the folder structure somewhat resembled that of GlassFish, but with some extra directories. E.g.

Looking at the modules directory in fact did make it clear that WebOTX is in fact strongly based on GlassFish:

The jar files are largely identical in the part shown, although WebOTX does have the extra jar here and there. It's a somewhat different story when it comes to the glassfish-* and gf-* jars. None of these are present in WebOTX, although for many similar ones are present but just prefixed by webotx- as shown below:

When actually looking inside one of the jars with a matching name except for the prefix e.g. glassfish.jar vs webotx.jar, then it becomes clear that at least the file names are largely the same again, except for the package being renamed. See below:

Curiously a few jars with similar names have internally renamed package names. This is for instance the case for the well known Jersey (JAX-RS) jar, but for some reason not for Mojarra (JSF). See below:

Besides the differences shown above, name changes occur at a number of other places. For instance well known GlassFish environment variables have been renamed to corresponding WebOTX ones, and pom.xml as well as MANIFEST.FM files in jar files have some renamed elements as well. For instance, the embedded pom.xml for the mojarra jar contains this:

With the MANIFEST.FM containing this:

Trying out the server

Rather peculiar to say the least for a workstation is that WebOTX is automatically started when the computer is rebooted. Unlike most other Java EE servers the default HTTP port after installation is 80. There's no default application installed and requesting http://localhost results in the following screen: 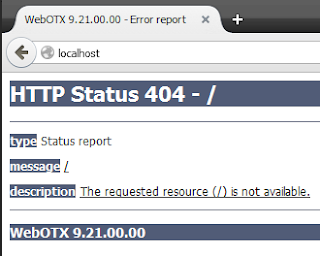 The admin interface is present on port 5858. For some reason the initial login screen asks for very specific browser versions though: 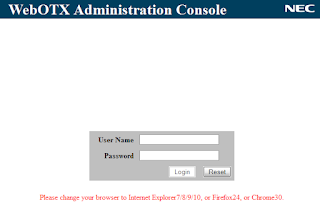 After logging in with username "admin", password "adminadmin", we're presented with a colorful admin console: 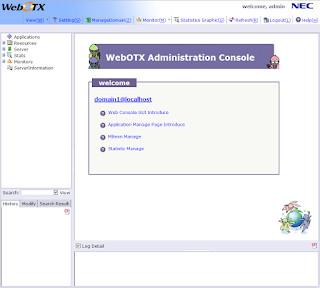 As is not rarely the case with admin consoles for Java EE servers there's a lot of ancient J2EE stuff there. Options for generating stubs for EJB CMP beans are happily being shown to the user. In a way this is not so strange. Modern Java EE doesn't mandate a whole lot of things to be configured via a console, thanks to the ongoing standardization and simplification efforts, so what's left is not rarely old J2EE stuff.

I tried to upload a .war file of the OmniFaces showcase, but unfortunately this part of the admin console was still really stuck in ancient J2EE times as it politely told me it only accepted .ear files: 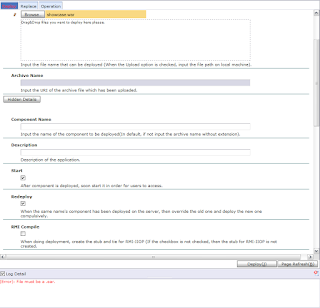 After zipping the .war file into a second zip file and then renaming it to .ear (a rather senseless exercise), the result was accepted and after requesting http://localhost again the OmniFaces showcase home screen was displayed:

As we can see, it's powered by Mojarra 9.2.1. Now we all know that Mojarra moves at an amazing pace, but last time I looked it was still at 2.3 m2. Either NEC travelled some time into the future and got its Mojarra version there, or the renaming in MANIFEST.FM as shown above was a little bit too eagerly done ;)

At any length, all of the functionality in the showcase seemed to work, but as it was tested on GlassFish 3 before this wasn't really surprising.

We took a short look at NEC's WebOTX and discovered it's a GlassFish derivative. This is perhaps a rather interesting thing. Since Oracle stopped commercial support for GlassFish a while ago, many wondered if the code base wouldn't wither at least a little when potentially fewer people would use it in production. However, if a large and well known company such as NEC offers a commercial offering based on GlassFish then this means that next to Payara there remains more interest in the GlassFish code beyond being "merely" an example for other vendors.

While we mainly looked at the similarities with respect to the jar files in the installed product we didn't look at what value NEC exactly added to GlassFish. From a very quick glance it seems that at least some of it is related to management and monitoring, but to be really sure a more in depth study would be needed.

It remains remarkable though that while the company NEC is well known outside Japan for many products, it has its own certified Java EE server that's virtually unheard of outside of Japan.