- August 21, 2011
Older versions of Java EE and Java frameworks in general were rather heavy with regard to required XML for configuration. Notorious were EJB2, Spring 2.x, JSF 1.x, Servlet 2.5 and many more.

These days things have improved quite a lot. In this post I'll demonstrate a very simple, yet 3-tiered, Hello word application for Java EE. It uses JSF 2.1 and EJB 3.1 and absolutely not a single line of XML configuration.

The entire application consists of just 3 files: page.xhtml, BackingBean.java and BusinessBean.java. To run the application, create a dynamic web project called 'mytest' in Eclipse (EE edition) and delete everything that's generated by default in WebContent. Copy page.xhtml to WebContent and copy both .java files to src. Add the app to your server (e.g. Payara 164) and browse to localhost:8080/mytest/page.jsf to see all the action.

The following shows the code of the 3 files involved:

The following shows that the project in Eclipse only has the 3 mentioned files: 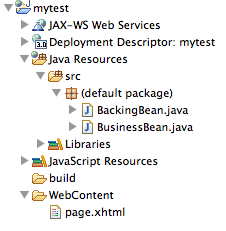 The deployment itself also consists of only the 3 files mentioned (no IDE generated magic), although one extra step has been performed and that's that the .java classes have been compiled to their .class versions and have been put into a newly generated directory WEB-INF/classes: 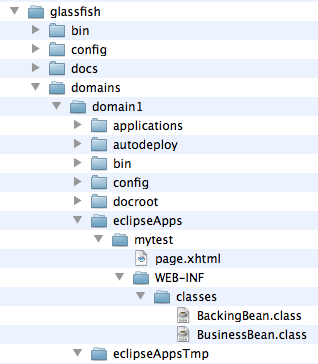 Note the use of a couple of conventions that make this all work:

Finally, note that the goal of this example is to demonstrate one of the simplest possible setups and doesn't necessarily adheres to all best practices. In reality, for non-trivial applications you'd want to declare you instance variables as private, definitely would not use the default package for your classes, probably create separate packages for your backing and business code, make sure *.xhtml is not directly accessible (e.g. by mapping the Faces Servlet directly to .xhtml in web.xml), and if your application really grows you might want to consider putting the business code in a separate module, add interfaces to the beans, etc etc.

But the point is that Java EE (and various other Java frameworks as well), now allow you to start with very simple defaults, making the barrier to enter much lower than before. You can then refactor and configure when the need arrises.

Dynamically adding an interceptor to a build-in CDI bean

- August 23, 2017
In Java EE's CDI, beans can be augmented via 2 artefacts; Decorators and Interceptors. Decorators are typically owned by the application code and can decorate a bean that's shipped by the container (build-in beans) or a library. Interceptors are typically shipped by a library and can be applied (bound) to a bean that's owned by the application. So how do you bind a library shipped interceptor to a library shipped/build-in bean? In CDI 1.2 and before this wasn't really possible, but in CDI 2.0 we can take advantage of the new InterceptionFactory to do just this. It's not entirely trivial yet, but it's doable. In this article we'll demonstrate how to apply the @RememberMe interceptor binding from the new Java EE 8 Security spec to a build-in bean of type HttpAuthenticationMechanism, which is from the Security spec as well. First we configure our authentication mechanism by means of the following annotation: @BasicAuthenticationMechanismDefinition( …
Read more